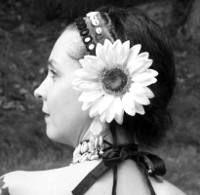 I decided I wanted to interview Jennifer Pelland about her first novel, Machine, because her short story collection Unwelcome Bodies changed my life.

That’s not a statement I make lightly, either.

Some of you may know that I spent almost five years (from 2003-2008)  in a sort of brooding, fuzzy-brained rut in which I didn’t have the concentration to read or write much fiction.  Then, in the fall of ’08, I attended Context, a book-focused convention in Columbus, Ohio (my first con in years), and discovered a copy of Unwelcome Bodies at the Apex table.   I didn’t know Michele Lee very well at the time, but she had accompanied my old friend Debbie Kuhn to the convention.  Michele highly recommended the book, and I’m so glad she did.  It was a two-fer:  the beginning of getting to know Michele, and the beginning of getting to know Jennifer Pelland’s work.

Unwelcome Bodies blew away my past stereotypes of what science fiction had to be.  Somehow, over the years, I’d forgotten about the tradition of social science fiction.  I also hadn’t realized — for whatever reason — that SF could also be gritty and grotesque.  It reignited my passion for reading.  At the risk of sounding maudlin, it helped me rediscover a part of myself that I thought I’d lost forever.   So, when I discovered that Apex Book Company  planned to publish Machine, I felt I should repay the favor by using my blog to focus some much-deserved attention on Pelland’s work.

And now, without any further ado, the interview.

Nicole Cushing:  I’ve read and admired your short fiction collection, Unwelcome Bodies. Most of the stories in that book seem to relate to our connection with our bodies, and the way you explore that connection struck me as unique. Your stories have a dark edge, but this isn’t “body horror” in the style of Clive Barker or Octavia Butler’s “Bloodchild”. Why are bodies important and why is it important that we write about them in ways they haven’t been written about before?

Jennifer Pelland:  I suppose it simply feels natural to me to write about the dark side of the human body, because I’ve always had such a fraught relationship with mine. I spent most of my life as someone who simply saw my body as an awkward, easily-bruised conveyance for my head, and as such, its demands and betrayals were a constant source of annoyance. When I was young, I became very aware of just how fragile a state “able-bodied” was, and would to do things like try to learn to write left-handed (in case I had an accident like Johnny Tremain), or to read braille (in case I went blind like Mary Ingalls), or to type with a pencil in my teeth (in case I became a quadriplegic like Jill Kinmont). And then puberty brought a whole new host of horrors.

But at the same time, I did enjoy the lush pleasures of the body that came from floating in cool lake water, or drowsing with heavy limbs in bed, or having a full belly, or getting a really good back rub, so I knew that bodies couldn’t be all bad. Mind you, the full belly pleasure ended up being fleeting. When I got my adult metabolism and had to learn to moderate my intake of delicious things, that was an entirely new body betrayal right there.

So I suppose that’s why it was so important to me to find ways to write about my uneasiness with the meat sack that housed my brain — my relationship with it was so weird, I had to do what I could to explore it so I could attempt to make sense of it.

However, in the past few years, my relationship with my body has changed radically. I’ve become a performing belly dancer. That’s all about reveling in the body. Sure, I’m frustrated at my two blown knees, and my complete and utter inability to be even the tiniest bit flexible, and by the fact that I have an incredibly difficult time layering moves without looking like I’m having some sort of a seizure, but when I perform…it’s all about sharing my enjoyment of what my body can do.

Needless to say, I wrote Machine and all the stories in Unwelcome Bodies before I started getting halfway decent at dancing. I’m still trying to figure out what to write about now, and how to make time for writing in between the full time job and dance practice. As much as I miss my writing muse, I have to admit, there are far worse problems to have.

N.C.:  It seems to me that both reading and writing engage the heart and mind, but not the body. In fact, I’ve noticed that if I’m engaged in reading or writing for a significant period of time, I can grow distant from my body. For me, it’s almost a dissociative experience. I drift off somewhere else. I don’t exercise. I get “all up in my head”. Then I run across your fiction, which throws me back into consideration of my body, of all bodies, as well as the social aspect of bodies – the sex and politics and ethics of bodies. I think that’s what makes your fiction unique, and also quite important.

Do you ever consciously plan to throw the reader back into consideration of his or body, or is this just something that grows organically out of your fiction? If you buy into my premise that lots of people seek escape from their bodies (via entertainment, or substance abuse, or over-intellectualizing things) why do you think this is? Why are our bodies, so often, unwelcome?

J.P.:  If I do that, it’s completely unintentional. I suppose it has to be difficult to read about bodies without thinking of one’s own. I certainly always have. If I read about any sort of different body, be it the result of a birth defect, an accident, or a willing or unwilling body mod, I become acutely aware of my body and will find myself imagining what it must be like to live in a body that’s been changed or that differs from the so-called “norm” in that way.

As for the “sex and politics and ethics” — I’m very glad to say that I’ve known many incredible people in my life who very from the aforementioned so-called “norm” in a variety of ways, and by talking to them and watching them interact with the world, I’ve gotten an amazing education in the dignity in all flavors of humanity. This isn’t to say that I haven’t committed/do not commit/will not commit some truly horrific ableist and privileged fails. But what it means is that I try very hard not to let the characters in my writing be confined by the societal definitions of “normal” or “healthy” or “proper.”

And on the topic of the desire to escape the body, I can only come at it from the perspective of a nerd. There’s a lot to be said for launching yourself into a world that you cannot physically inhabit, either because we don’t have a space program, or because there is no such thing as an elf, or because humans can’t breathe water, or because this is not the 24th century…or…or… Sometimes, I think that to fully inhabit a world like that, we have to decouple from this one. And that’s not a bad thing. Imagination is what drives us to change things, and if that means we need a little vacation from our body, so be it.

N.C.:  Can you tell us about Machine? In what ways is it similar or different from Unwelcome Bodies? I mean, obviously one is a collection and the other is a novel, but are there nuances in theme that you explore in Machine that you’ve never explored before, or new ways you explore old themes?

J.P.:  Machine takes place in a future where sick people can have their consciousness transferred into a mechanical replacement body that looks and feels just like their flesh body while they wait for their flesh body to be cured. The protagonist, Celia, loses her wife in the process, and in her grief, eventually falls in with a group of illegal body-hackers who modify their bodies in ways that redefine gender and humanity. So in that respect, it’s very much a story along the same continuum as those in Unwelcome Bodies. But because I have an entire novel to spend in one person’s head, I get to take my time bringing her on her body-defying journey. And I get to populate her world with many more people on similar journeys to hers, which means I get to show off that broad swath of humanity I was talking about earlier. But at its core, it’s a love story with body dis-ease at its core, so I guess it’s classic me. Oh, and like Unwelcome Bodies, if a child gets within 500 feet of it, you’ll get a visit from the DSS.

er Pelland.  Available in ebook and paperback formats at the Apex Book Company website or Amazon.com.