A Thank You to Readers of the Lovecraft eZine 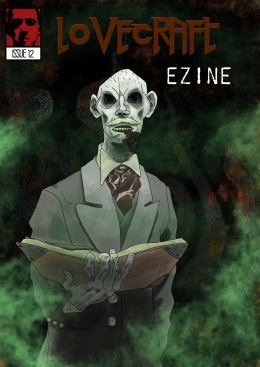 There are lots of days I wish I was a stand-up comic instead of an author of weird, dark stories. Sure, stand-up (even just starting-out) would probably pay better. But the real incentive is that I’m impatient, and stand-up would mean getting instant feedback on my work.

Just think about it: a stand-up comic gets instant gratification. She doesn’t even have to wait until after her performance to know whether or not she’s bombed. She knows right then and there whether the audience “gets”and appreciates her stuff. If the audience laughs, she’s succeeded.

Not so with a writer. I spend weeks/months on a story. Revise it. Send it out to folks for critique. Revise it again. Revise it, sometimes, many, many times until I’m satisfied that it’s as good as it can possibly be. Then I send it out to an editor. After a few months, the editor lets me know if the story has been accepted or rejected. Then another few months (or longer) until it gets published.

Then (maybe, not all the time, but sometimes) I’ll get some reader response.

A little over a week ago one of my stories (a little 2600 word tale called “A Catechism for Aspiring Amnesiacs”) was published in The Lovecraft eZine. The eZine maintains a comments thread under each piece, so that readers can provide feedback, dissect the stories, criticize them, etc. So far, the reader response for “A Catechism…” has been quite positive.

In fact, I’ve been overjoyed to find that in addition to reader feedback, the story has been praised by a few long-established and critically-acclaimed Lovecraftian authors. People like Wilum Pugmire, Joe Pulver, and Ann K. Schwader have taken time to post positive remarks in the comments thread underneath the story.

Their praise (along with the praise of several readers) has just bowled me over. I really don’t know what to say. So, I’ll just keep it simple and say, “Thank You”. Thank you for reading my story and letting me know what you think of it. Thanks, also, for contributing to The Lovecraft eZine during its recent financial stress, as that support ends up helping authors, too.

Little zines have always exerted disproportionate influence in Lovecraftian fiction, going back to the days of H.P.L., himself, and his participation in the amateur journalism movement. Zines like Crypt of Cthulhu and Nyctalops helped foster an environment in which Lovecraftian fiction not only stayed alive, but thrived and evolved, in the ’70s ,’80s, ’90s. It’s my hope that Mike Davis’ Lovecraft eZine can play a similar role in our present day.